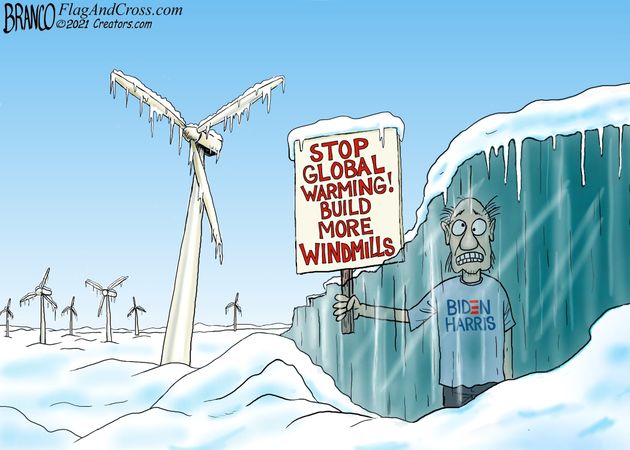 Yes, but let's not forget the $19 Billion spent subsidizing "green energy" windmills and solar farms, which otherwise are not viable economically. That money might have then been better spent on maintenance...
Menachem Begin to Joe Biden (1982): I Am Not A Jew With Trembling Knees. I am a proud Jew with 3,700 years of civilized history.
Top

Correct. Even if the wind turbines that were slated to be operational were 100% up and running, we'd still in a pickle. The one thing that could've saved us is the natural gas supply to those particular plants. They were not designed for this level of cold. Now the wind turbine critics do have a very fair point, though. Those just cannot run in the cold. 1/3 of the generation lost during the crisis was from those wind turbines, which only make up 11% of the winter power generation. So let's not discount the critics and their complaints. This is still a prime example of why wind and solar are NOT the way to go for electrical generation. My vote goes to current generation nuclear. They are meltdown proof. They eat their own waste. They are compact enough to bury underground. They generate a ton of green electricity 24/7. What's not to like? Why isn't there a bipartisan push for it?

Another thing to keep in mind are the different types of fossil-fueled powered generators. There are some low powered generators that can be turn on in a pinch. Those typically take hours to activate. The normal large generators that we rely on normally take days. Yes, days. Many of them were offline because they end up costing more money to run than they make in the wintertime.

Then there's the way many homes in Texas are warmed. My entire neighborhood - scratch that. My entire town relies on electricity only. I have a larger-than-average home that relies on two air handlers to warm and cool. I am pulling 100 amps (22KVA!!!) when both heaters are running. Many of my homes in the neighborhood are the same way. In fact, huge swaths of homes rely on electric furnaces. When things get really cold. electrical requirements skyrocket. 03lightningrocks explained it well, saying 8-10 neighborhoods need to be shut down for my single neighborhood to be powered up. Considering the logistics involved with rolling blackouts, I'm not surprised Oncor just left the majority-furnace neighborhoods on. I probably would've done the same in their situation. The north doesn't have that problem, since they still rely on gas furnaces and even pellet-fueled furnaces for heat. They don't have insane power requirements to heat their homes. Not to mention their gear is designed for winter weather. Ours aren't.

Speaking of which, I wouldn't know if I would require 0-degree rating of our power generators. It is just so rare that all 254 counties were under the cold snap warning. So rare it's never happened before. We've been cold in the past, but not to this large of a geographical scale. I would presume it would cost a lot to get the generators to operate at both 0 degree and 120 degree weather. It may not make economic sense. The pareto principle would apply to reduce cost on tax payers and the burden and time to make it work just for something that may or may not happen. I can't really fault the Texas government on this. Of course, hindsight is a b***h.

On that note, do you think new homes foregoing natural gas and relying 100% on electricity has to do with going green and not relying on fossil fuels anymore? Because well, natural gas is a fossil fuel after all.

There's also the winterization of homes. Most builders won't account for that sort of stuff. PEX plumbing is not a consideration. Freeze-proof hose bibs aren't a thing. Insulated piping? That just costs extra money. They just want to get things done on the cheap because they both want to maximize profits and to appease the cheapskate clientele. And yes, they can get away with it because it's not part of building code here. Should it be?

We can also talk about the grid, but there are upsides and downsides to having an independent grid. Yes, this storm is an example of a downside because we can't borrow from our neighbors, but there are other upsides we don't talk about when times are good.

Ultimately, I believe it's a huge swath of issues that caused this perfect storm of an event. I would say the whole electrical grid failure could have been mitigated if ERCOT actually listened to NWS when they said things will go south 2 weeks before Uri rolled in. It takes days to power up a plant, sure, but they had weeks. No excuses there. Despite that, there are still shortcomings we can still address all across the board. This makes a perfect learning experience, not a blame game.
Top

Apparently you missed the irony in that picture. Wind and solar are not the "all-saving grace" the enviro-nazis would have us believe.

Wind and solar did not CAUSE the problem, but they certainly contributed. Last year was the first time wind power production in Texas exceeded that of coal. When wind and solar failed during this cold weather, they were unable to help offset the other failures.

I believe the government is the biggest obstacle to moving to more environmentally friendly energy sources. As long as government subsidies (taxpayer money) keep propping up wind, solar, and bio-fuels, there is no incentive to fix their shortcomings. For anything to replace fossil fuels, it must first be economically competitive. Government keeps getting in the way of that.

"We have met the enemy and he is us."
Top

I just received a weather notice on my phone, that the hard freeze warning, for Johnson County, expires in 22 hours and 22 minutes.

Does it then become a soft freeze warning??????

Also why the random 22 hour and 22 minute designation? Why couldn't they just have let me know an hour and thirty eight minutes ago, that it would end in 24 hours?

Maybe the cold is just affecting my brain, causing strange pondering to creep in.

Take Away The Second First, And The First is Gone in a Second!!

A buddy of mine lives in Riesel. He said he thought he was living in California. Staring at wind turbines with no power in the house.
Why is it so hard for politicians to understand "shall not be infringed?"
Top

We were lucky. Apparently Gatesville's water plant is on our sub station and we never lost power. Feel kind of bad but at the same time happy for it. I guess I did an ok job insulating the well because it didn't freeze and that was my main concern. My storage tank and pressure pump are in the shop which never got below 40 degrees even though I was sweating it freezing because it never has gotten below 50.

Now that i said that, I bet I get hit in the summer when ERCOT makes an excuse for brown outs in August.
Why is it so hard for politicians to understand "shall not be infringed?"
Top

strogg wrote: ↑Thu Feb 18, 2021 9:47 am That was an interesting journey.... So Monday morning 2AM the rolling blackouts started. Tuesday morning, the power came on at 10AM for all of 5 minutes. The next time power came on was Wednesday at 9PM or so for all of 6 minutes 33 seconds. The rest of the neighborhood was experiencing the normal blackout rotation, but we weren't. After the power went out again Wednesday night, my neighbor and I flagged down an Oncor truck that was driving by. Yes, two grown men flagged down a utility truck like it was an ice cream van. What times we live in! Anyway, we apparently blew fuses, which is why power was not working for our corner of the neighborhood. The gentleman was super nice and dedicated, so props to him. He got authorization for a larger fuse, and our power has been back up since with no interruption. Hopefully this will last for good.

Sounds similar to my daughter in Spring. Her 4 yr old lost his fish and aquatic frog in the cold/no power, and now cries for snow to go away.
Top

So, I had to sell my home last year. I downsized from 2300 SQ ft to 700. A lot of my stuff wouldn't fit in the new house.
At closing, the buyer asked me to be out a week earlier. She was buying the home for her daughter who ran with her kids and the clothes on their backs.
I told her I wouldn't have time to clear out anything I wasn't taking. She said her daughter had nothing and asked if I was getting rid of it if I would just leave it. Furniture, dishes, blankets, towels, bikes, tools..
I am divorced over domestic abuse. So when I told my son this, we unpacked items and left for them.
I only kept 2 blankets. Its been a year and I haven't replaced what I left.
I also left an entire fenceline stacked 3 ft high with firewood.
And a generator.
It would have been nice to have, but we were warm enough. And my prayer was to always help someone who ran...
This was rough. But I'm in a place to begin replacing things. This freeze taught me what I need to focus on and given me a starting place.

I was right on about pipes freezing: my mother in Arkansas left hers trickling, but not enough. She's waiting on a plumber to see how bad the damage is. It's an 1896 house on pier & beam. We installed plumbing in 1973 when we moved there.
What do I miss about Texas? Most of the food, some of the people, absolutely none of the weather.
Top

strogg wrote: ↑Thu Feb 18, 2021 10:22 amMy vote goes to current generation nuclear. They are meltdown proof. They eat their own waste. They are compact enough to bury underground. They generate a ton of green electricity 24/7. What's not to like? Why isn't there a bipartisan push for it?

I believe that the problem is that many on the left are afraid of nuclear power. Understanding nuclear power requires understanding and having faith in science. That goes against what many on the left truly believe. They are in general afraid of science, which is why on so many things they yell that the science is settled. Anyone who truly understands science realizes that science, like the law in court cases, is never truly settled. Science is based on going back and looking at our assumptions and reevaluating them in light of new facts. This is why some of our earliest scientists were ostracized for their conclusions.

One of the interesting, and puzzling differences to me, is that 400 years ago, it was the conservatives who were yelling and putting down science. Now it is the so-called progressives who refuse to believe in the scientific process. While I am somewhat of a social scientist, this is a different area than I studied and I can observe it but not understand it.
Steve Rothstein
Top
Post Reply
40 posts

Return to “Off Topic”